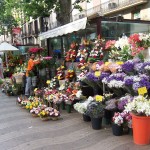 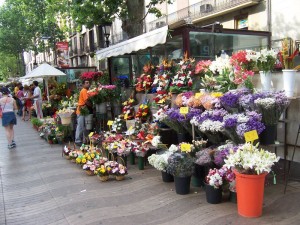 Las Ramblas is one of the most famous streets Barcelona. It is 1.5km long and it is located between Plaza Catalunya and the city’s port.

Las Ramblas is full of people by day and by night. It has small kiosks that sell newspapers and magazines, street flowers, pet birds, actors with painted faces and costumes, cafes, restaurants and all kinds of stores. Near the port there are weekend markets with artisans, painters and sketchers.

As you a walk on La Rambla you will find several buildings of interest, like the Palace of la Virreina, as well as the market of La Boquería and the famous Liceu Theater with the most spectacular operas and ballets. One of the lateral streets, which is only a few meters long leads to Plaza Real, a beautiful square with palm trees and amazing buildings that welcome breweries and restaurants.

The Rambla ends at the old port (square of Portal of La Paz), where the famous statue of Cristóbal Columbus is found, after that you find a large pedestrian bridge that leads to the Maremàgnum complex.

The old port offers other tourist attractions, like a shopping mall, restaurants, an IMAX cinema, and the city aquarium.

To get to Las Ramblas from the hostel takes around 20 minutes to walk. 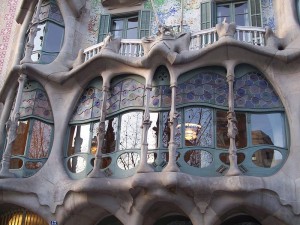 La Casa Batlló is one of Gaudi: Leader of Catalan Modernism´s, most famous buildings. This is a remodeling of a building that existed in this same place by Emili Sala Cortés. It is located on the famous Passeig de Gracia, the wide avenue that runs through the Eixample district; a perfect example of modernist area. In this well known artistic area of the city other works of modernist architects exist such as La Casa Amatller by Josep Puig i Cadafalch, la Casa Lleó Morera, by Lluís Domènech i Montaner; and la Casa Miralles, by Enric Sagnier i Villavecchia

When you visit La Casa Batlló most are impressed by its unique architecture. You can take guided tours from 9am until 9pm, in summer you can listen to music piano and drink a glass of champagne on the terraces of this world heritage site.

This building is just a few blocks from the hostel!!! 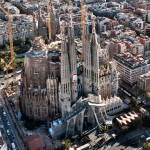 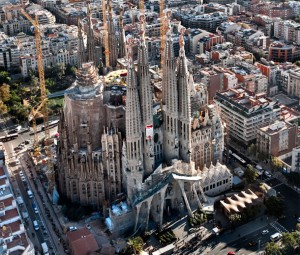 The Temple of the Sagrada Familia, known simply as the Sagrada Familia is a Roman Catholic Basilica in Barcelona, designed by the Catalan architect, Antoni Gaudí. The construction started in 1882 and it is still under construction. It is the masterpiece of Gaudi and the greatest exponent of Catalan modernist architecture. It receives more than 4 million visitors a year making it the most visited monument in Spain.

The construction began in the Gothic style, but after assuming the project Gaudí intended in 1883 it was completely redesigned. The temple, when completed, will have 18 towers, four in each of the three entrances, portals and domes. And a system of six towers, with a central dome tower (dedicated to Jesus at 170 meters height), four around it, dedicated to the evangelists, and a second dome dedicated to the Virgin. The interior is made up of innovative tree-inclined columns and vaults based on hyperboloids and paraboloids (different types of curve shapes) looking for the optimal shape of the curved features.

It is certainly the most famous tourist attraction in Barcelona, located 10 minutes walk from Hostal Khronos and a must see. Ask at the reception and our staff will be happy to provide detailed explanations on how to get there, the prices and schedule visits. 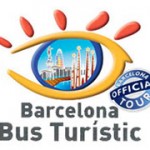 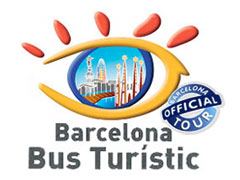 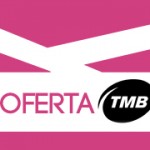 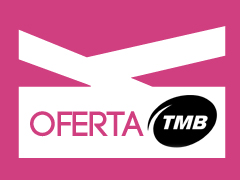